What Style is Your House? 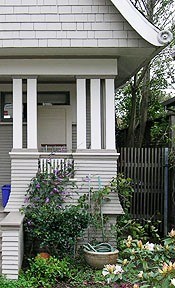 We all know and love those older neighborhoods in cities and towns across Iowa with the beautiful homes – expansive front porches, exposed roof joists, decorative brackets, stucco walls, true divided lite windows — houses representing all sorts of styles of architecture: Tudor, Colonial, Mission, or Prairie.  Maybe you grew up in one, visited your grandparents in one, or live in one now.

These homes evoke a sense of a bygone era when people sat on their front porch and visited with their neighbors. Hung laundry on a line in the backyard. Had a row of peonies that lined the walk.  Garage doors facing the street, which are currently the predominant feature of most houses, were not to be seen.  Small garages were accessed by an alley in the back. The front of these homes were open to the neighborhood and encouraged social engagement.

Because people love these old homes, building in that style is making a comeback.  There is a contemporary movement in residential design to move away from the “McMansions” of the last few decades toward “The Not So Big House” (a website and a book by Minnesota residential architect Sarah Susanka. See:  notsobighouse.com).  We have found a new appreciation for the fact that these older homes were designed to be just the right size – for small families, large families, working class people, or people with means.  They were not “one size fits all”.

When were these houses built? Why are they all different styles and sizes? What can we do to preserve and protect them? 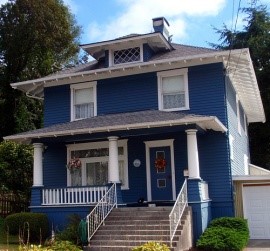 Let’s start with the first question:  the stylized period of house construction started in about 1900 and lasted until the depression, when new home construction plummeted.  This was a period of significant population growth in the Midwest, and, in the case of cities, a time when people wanted to move away from the cite core and into nice neighborhoods with sidewalks, lawns and gardens.

Developers at the time saw an opportunity.  Americans are a sentimental and nostalgic people.  Homes recalling quaint Tudor cottages, familiar Colonial themes, Victorian mansions, or exotic Mission haciendas sold well and developers and carpenters built them by the thousands.  Also, a movement that started in England as a reaction against the Industrial Revolution, caught hold in the United States that encouraged honest labor and working with one’s hands:  the “Arts and Crafts” movement.  Gustav Stickley published a popular magazine called “The Craftsman”.  The artistry of the carpenter was celebrated:  wood details were emphasized and warmth and scale were prized.  Finally, major mail order companies found that they could sell “Kit Homes” to this growing population wanting solid, honest, and quaint homes to live in.  Sears and Robuck and Montgomery Ward sold these homes through their mail order catalogues. 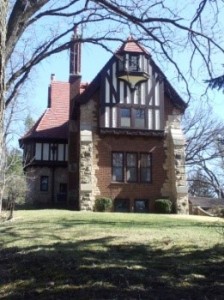 Walking down one of these older neighborhoods look for the following details:

These are just a few of the many styles you will find.  A great resource for identifying the style of your house is a book called  A Field Guide to American Houses by Virginia McAlester.  Also consider taking a course on this topic that the Iowa Architectural Foundation offers through the Des Moines Public Schools Community Education program.  Have fun wandering through these neighborhoods and enjoying these homes!

Tom Wollan, AIA, is principal architect at FRK architects + engineers in West Des Moines and chair of the Architecture in the Community Committee and long-time board member of the Iowa Architectural Foundation.
Category: Architects, Places
Share This Story
Back to Perspectives