What are National Historic Landmarks (NHLs)? These are buildings, sites or structures recognized by the National Park Service (NPS) as having a higher degree of historical significance than buildings listed on the National Register of Historic Places (NRHP). Only about 3% of the listings on the NRHP qualify to be recognized as an NHL. Additional research and documentation justifying the designation needs to be submitted and reviewed by the State Historic Preservation Office (SHPO) and the NPS. Successful designation is honorary, and does not specifically protect the building from changes or even demolition.

Iowa currently has 25 designated National Historic Landmarks, or about 1% of the NHLs nation-wide. The city with the most NHLs in Iowa is… Sioux City, with three NHLs. 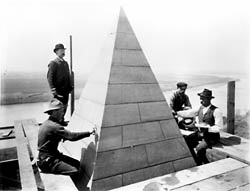 The Sergeant Floyd Monument is considered the very first designated NHL in the county, officially designated June 30, 1960. The monument is a large stone masonry obelisk commemorating the death and burial of Sergeant Charles Floyd on August 20, 1804, as part of the 1804-1806 Lewis and Clark expedition. Floyd was buried at this location on the bluff overlooking the Missouri River, and was the only death of that expedition party. Someone thought to make a plaster cast of his skull, while his remains were being collected for interment within the monument, while it was being completed, in 1901. 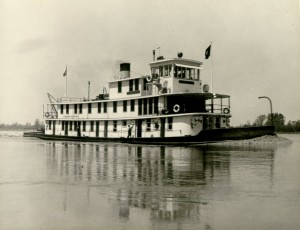 The Sergeant Floyd towboat was designated a NHL on May 5, 1989. This former US Army Corps of Engineers boat didn’t have a strong connection with Iowa until it was parked here on land after retirement, at Missouri River mile marker 730. Sioux City remains today the uppermost port on the river, still served by commercial barge traffic. The steel hulled twin screw boat was built in 1932 and was used by the Corps between 1933 and 1975 to improve navigation along the Missouri River. The boat operated with a crew of 21, with room for about 10 passengers. The boat is now a museum and the resting place for that plaster cast of Floyd’s skull. A forensic artist used the cast to create a likeness of Sergeant Floyd, which is on display. Like Floyd’s monument, the boat is another example that not everything listed in the National Register of Historic Places are buildings. 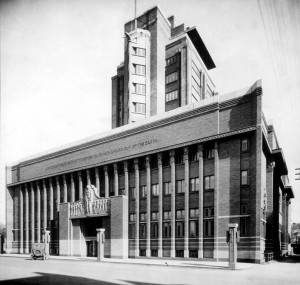 The Woodbury County Courthouse was designated a NHL on June 19, 1996. It is considered one of the largest Prairie School style buildings in the world. Construction commenced in 1916 and was completed in 1918. It is well known for its use of terra cotta and stained glass. The interior rotunda is capped by a stained glass dome, even though an 8 story tower rises above it. Local architect William Steele partnered with Minneapolis architects George Elmslie and William Purcell. Interestingly, it is reported that Steele first proposed a Gothic Revival design, and after receiving the contract to design the building, convinced the Board of Supervisors that the Prairie Style was more suited for the Midwestern location of Sioux City. The original design included jail cells for the defendants awaiting trial, as well as dormitory rooms for up to four (all male) sequestered juries. The Sheriff and the building custodian had private apartments within the Courthouse. A Civil War Veteran’s organization, the Grand Army of the Republic, was allowed to meet in the room at the very top of the tower. This building still functions as a county courthouse.

Scotney Fenton is a registered architect and a partner at RDG Planning & Design in Des Moines, Iowa. He is the focus market leader of the Restoration Focus Market at RDG and has a passion for guiding building owners through the design and construction of restorations and sympathetic rehabilitations that celebrate their buildings’ history.
Category: Lists, Places
Share This Story