Mason City Iowa has a surprisingly strong collection of distinguished Architecture. For a town of 27,700 there is a large supply of great architecture from world famous architects. It has the largest planned development of Prairie School Homes. It has the last standing Frank Lloyd Wright hotel. It has one of the few operating valentine dinners. Several of the buildings are standing tall despite their need for some TLC. Many of the properties are very well taken care of and many more have been given new life in the last decade as Mason City and its residents have worked tirelessly to preserve and restore some wonderful works of art.  Here are my top 5 favorite buildings in Mason City. 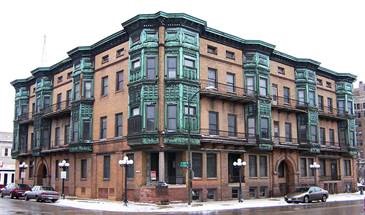 Not all buildings in Mason City are as refreshed as others but this is still a beautiful example of copper done well. Built in 1903 as luxury apartments it is an example of Victorian Architecture. The Kirk was named after Horace P. Kirk who was a Mason City Photographer. The Building was condemned in 1980 before being rehabilitated by a new owner. Just around the back be sure to check out the revived Valentine Diner. One of the last Valentine Diners still running. The exterior was restored in 2014. 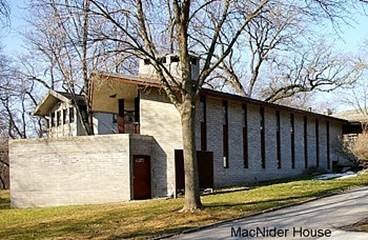 This Usonian home is a slight break from many of the Rock Crest Rock Glen homes around it. With its subtle lines it nestles into the hillside. When the Usonian concept was being developed at Taliesin Besinger was an apprentice. 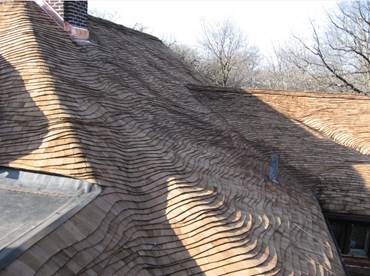 Opened to the public in 1966 as a museum the building was originally built by Burr Keeler in 1920. I love this one purely because of the fantastic steam bent cedar shingle roof. The Building has seen many additions through its ages. The Museum itself is definitely worth a stop and don’t forget to walk the bridge across the glen. The roof was re-shingled in 2008. 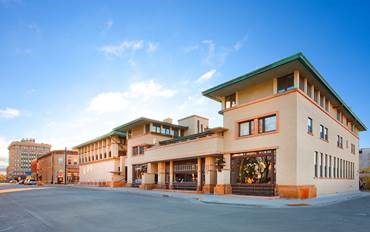 Originally built in 1910  and designed by Frank Lloyd Wright it went through several uses before the hotel portion was abandoned. The First National Bank building was still being used as retail. After a 16 year restoration the Historic Park Inn Hotel opened again in 2011. It has a wonderful 1910 restaurant on the main level and in the basement the 1910 lounge is a great end to the day. The Architect in charge of the restoration was Martha Huntington who passed away 3 months before it opened.

1. Melson house built in 1912 and designed by walter burley griffin

The house was designed for J. G. Melson who was one of the developers for the Rock Crest-Rock Glen area. The local stones stepping down over the edge of the glen and looking out over the river is a keystone in the crescent of beautiful homes in the Rock Crest Rock Glen development.

Doug Foreshoe, AIA, is Principal Architect at Bergland & Cram in Mason City, Iowa and an IAF Board Member.
Category: Lists, Places
Share This Story
Back to Perspectives