Congratulations to the Winners!

The awards program recognizes those individuals, organizations, agencies, or communities, outside the architectural profession, who have demonstrated consistent and effective leadership, vision, and support for architecture, contributing to the betterment of Iowa communities. Quality architecture and urban design can play a big part in making communities more livable – affecting our environment, sustainability, health, culture, identity and economy.

Principal started building its campus of buildings in 1939, more than 80 years ago. Then known as Banker’s Life, the company built what was hailed nationally at that time as one of the most modern buildings in the country. Its headquarters renovation is the cornerstone of Principal’s just completed $400 million campus renovation, which is the largest project downtown Des Moines has seen in years. Other significant buildings include the “Z” building; the 801 Grand highrise, and a world class campus landscape plan. The company has also contributed to many development projects in downtown Des Moines and along with their campus, have significantly enhanced the Greater Des Moines community. Most notable is the Principal Riverwalk, which was a joint venture between the City of Des Moines and the Principal Financial Group to develop a 1.5-mile waterfront pedestrian loop and multi-purpose trail spanning the Des Moines River between the city’s downtown and State Capitol districts. The Riverwalk provides a route for existing hike and bike trails through Des Moines’ downtown. The new plazas, promenades, tree plantings, seating areas, pavilions, artwork and gardens provide improved access to the Des Moines River, catalyzing growth along what was once an underutilized riverfront. Because of this 80-year sustained effort to give back to our community, Principal is well deserving of recognition.

The jury commented, “Principal invested so much in downtown Des Moines when very few others were investing. It could be argued that they have had a more sustained positive impact on the city of Des Moines and downtown than any other company or any combination of companies. They’ve spoken publicly about how they want to make the community greater, while at the same time they want to have fabulous employees that are drawn to live in Des Moines. The ideal situation is when a company can accomplish both doing good and making money. They have certainly done that.”

Over the course of 35 years, developer Marc Moen has worked tirelessly to help transform Iowa City from a college town, known in part, for its bar culture, into a sophisticated urban center. He has done this with architecture: rehabilitating historic buildings, creating new mixed-use developments, and supporting arts and culture initiatives. Moen’s work in architecture began in 1985, when he saved the “first brick house in Iowa City” from being razed. He restored the building, and thus began his efforts to provide quality housing by rehabilitating poorly maintained historic properties. He grew his architectural interests three years later when he purchased and renovated a major mixed-use historic building in the central business district. Inspired by the project’s positive effect on the downtown, Moen would go on to rehabilitate many historic buildings including the Starbucks building, Packing and Provisions, Wells Fargo, Blackstone, and Brewery Square. He built his first new building in 1999: Whiteway 2000, which contained ground floor retail, apartment housing and urban condominiums for sale, a new concept in Iowa City. Motivated by its success, he built the Vogel house.

Moen continued his ambitions with a building that truly transformed Iowa City into an urban landscape: Plaza Towers. Comprising underground parking, permanent housing, a boutique hotel, commercial office, a restaurant, and an urban grocery store; the building received much praise and acclaim from Iowa Citians. It would go on to receive recognition from AIA Iowa and the Urban Land Institute for its design excellence and impact on the community. He then produced Park @ 201 and the Chauncey, two buildings that also had positive effects on the city’s growth. In addition, Moen has used architecture to cultivate many cultural institutions in Iowa City, including film and dance.

Said the jury: “This is a nice balance between new and existing work, which was notable; the idea of not just tearing down Iowa City but actually restoring important buildings and then being able to enhance the value of the community by putting money up for new developments. There’s a lot of risk that goes on in buying his buildings and in restoring them. The architecture is very strong. It’s a compelling case.”

Look for details on the time and date for Iowa Architectural Foundation’s virtual awards program later this month. 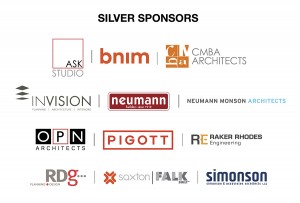